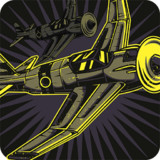 Man the tail gun turret in this WWII action/arcade shooter! Use your phone\’s gyroscope or touchscreen to aim your guns, and touch either red button to open fire.

Guns! Rack your twin .50-cals to defend your bomber against the ever-growing waves of Axis fighters.

Lives! You only get 5. Once 5 enemy fighters make it past your defenses, it\’s game over for you and your flight crew.

Ammo! As in unlimited, you\’ll never run out! Just keep an eye on how hot your guns are; if they overheat, the enemy won\’t wait for them to cool down before swooping in for the kill.

This game is graphically demanding, which means it will gleefully eat your battery. Don\’t play if you\’re without a charger and waiting for that call from the hospital to let you know your new kidney has arrived.

If you\’re aiming using your gyroscope and it drifts out of alignment (or you want to face a different direction), just point your phone at where the \”center\” should be and hit the Align button at bottom left.

Works with the Arkade Blaster: http://www.arkade.games